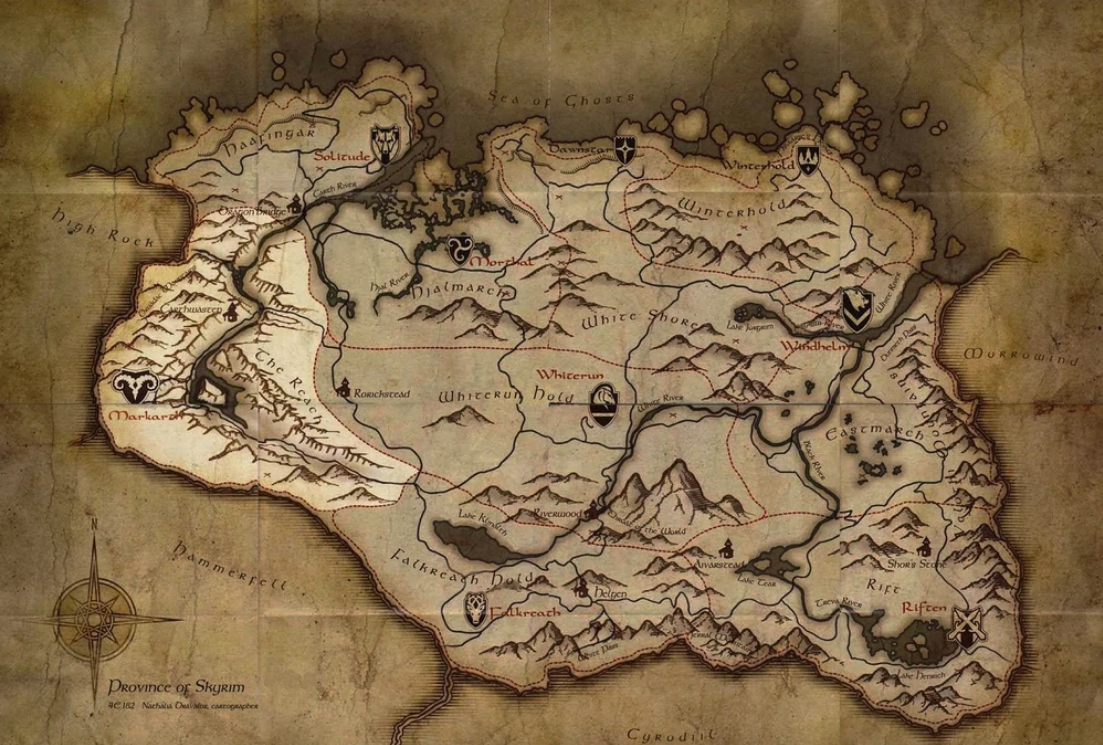 As it was hinted at during Greymoor’s Announcement Event, it comes as no surprise that we’ll go to:

with this year’s Q4 DLC, Markarth. This was confirmed by a new localisation line in the 6.1.0 PTS Update:

What is The Reach?

The Reach is the southwestern area of Skyrim, just above Craglorn and to the right of Bangkorai. Players of The Elder Scrolls V: Skyrim may recognise this geographic area as the place where the Forsworn Conspiracy questline took place, around the city of Markarth. It is a land spoiled by infighting, hagraven crones and vicious reachman blood magic.

ESO is roughly 1,000 years in the past from TES:V, so we will not be seeing the Forsworn, but instead their original Reachmen ancestors. It should be noted that The Reach it is no longer a hold of Skyrim in ESO’s time, but will be again by TES:V’s time. This is due to the Reachmen not being Nords and striving for independence over their nordic oppressors.

Before we get into the datamining, we think it is worth to mention OOB exploration. When we want to know more about the next zone or DLC, we try glitching out of bounds of the zone to see things that ZOS have planned, but have not intended us to see yet.

Thanks to the YouTuber GralorTV, we know that a fully modeled Deep Folk Crossing (1:58) is sitting in ESO’s “Western Skyrim” zone, just out of bounds.

Deep Folk Crossing is a dwemer ruin in TES:V, way outside the playable boundaries of Western Skyrim in ESO. What does this mean? It means we can start to pinpoint exactly how big the Q4 zone will be based on locations seen in The Reach. Because of other datamining we did, we know this locale will be in Q4, but under a different name (Bthar-Zel) because of the development map seen below.

We have datamined several maps and locations from the upcoming Q4 story DLC.
The following maps were datamined by Cidhna some months ago from the 6.0 Greymoor patch files. They depict an expansion to Blackreach, under the Reach area, and a new delve, Bthar-Zel. (Note: the white colour is not snow, it is just untextured ground).

Immediately we can see that the Q4 Blackreach is considerably smaller than Greymoor’s. However this is to be expected as Q4 Story DLCs are typically smaller in scale than the Chapters earlier in the year.

We believe that NH Keep is where Rada al-Saran will be hiding in ESO: Markarth, due to the vampire-like gothic architecture seen from the birds eye view. In addition, we have found the other side of the U26 entrance in Blackreach Greymoor Caverns.

We have one last location we datamined: Valthume. In TES5, it is an ancient nordic barrow wherein the dragon priest Hevnoraak can be found. There also has been a mention of Bthardamz in a new book on the PTS.
There is also an Icon in the game files that might correspond with a location in TES5’s Reach:

With these locations confirmed, we can start to determine how big the Q4 zone will be by applying the locations we know about to the Skyrim map.

You might be wondering how that would translate to ESO’s Map.
So we’ll apply our Reach Zone Outline to said map… and it overlaps a lot. This sadly happens rather often with ESO’s Zones as they are being developed bit by bit, ignoring possible geographic borders of other Zones. On ESO’s Map Craglorn for example is in a very different spot than it is supposed to be.

Therefore we can see that the possible zone of ESO: Markarth is surprisingly big, being around 2/3 the size of Western Skyrim. And, as we know from our datamine and dev comments, we’ll also get an underground Blackreach area as well.

Last year’s DLC, Dragonhold, featured one Major City, two minor settlements (one friendly, one hostile), a story base/settlement and two World Events (Dragons). All these features will however be divided between two Zones this time: the Reach itself and the Blackreach: Reach Zone.

Taking striking locations from Skyrim into consideration, we might also see:
Hag Rock Redoubt, Dushnikh Yal, Valthume, Bard Leap Summit/Lost Valley Redoubt, Ragnvald, Bthardamz and Arkngthamz.
We’ve marked them as eyes on the following map. But keep in mind that those are just points of interest in TES5 – the only datamined ones are those marked in red. We’ve also marked a blue area around Sundered Towers. This area is already accessed via Western Skyrim as a separate delve.

Sadly we don’t know much about ESO: Markarth’s story yet. All the information we got about it wasn’t actually datamined, but comes from the ESO: Markarth Prologue, which is currently playable on the PTS.
Rada al-Saran, the big villain of this year, has found a relic under the Reach. A relic he now wants to use for … something — perhaps a Darkstorm? (As the DLC was originally going to be called.)
Another big player in the Q4 DLC will be Count Verandis Ravenwatch, a vampire who entered Coldharbour at the end of Rivenspire’s zone story arc and was thought dead (or at least missing), until the player frees him in ESO: Markarth’s Prologue.
The marked location called “NH Keep” on the datamined Blackreach map is what we suspect to be al-Saran’s new base of operations.

In the Reach, we will also encounter a Reachmen Clan called “Timbercrows”. It is yet unknown if they are friendly or hostile to the player. However they are receiving both a Weapon Outfit Pack in the Crown Store and a costume obtainable through a runebox, so they might have a somewhat significant part in ESO: Markarth’s story.