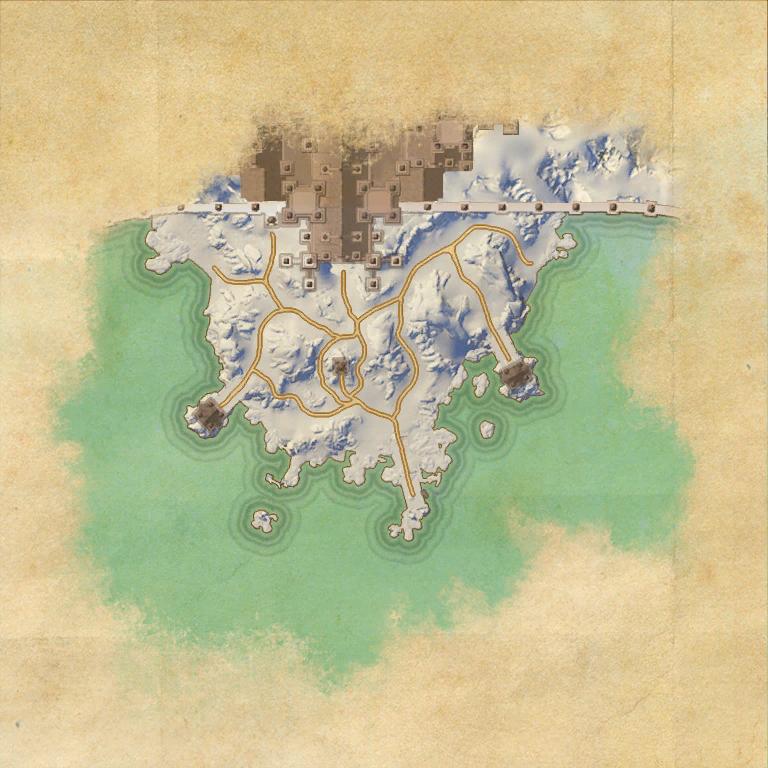 As you can see they finally fixed the Super-Autobahn going through Western Skyrim and replaced it with more appropriately sized roads. You may also notice that that buildings are now represented more accurate – and don’t melt into each other anymore.
You can also see the locations of the two new homes. The Antiquarian Gallery being just west of Labyrinthian, the Stillwater Retreat frozen lake being north of it.

Also see our big datamine of houses, costumes and other images.

A collection of datamined images from ESOs PTS, version 6.1.0.
Amongst the new things are: two new Houses, new Outfits, the new Sovngarde Crown Crate and many Sovngarde Drops – and a new datamined Crown Crate texture: Potentate.

Yeah we must admit, the new Tamriel Map isn’t that interesting to look at. After all, the only thing they added was a small Island off the Coast called: Grayhome.

When we first saw Grayhome in the files, some of us were convinced we found Volkihar Castle. The similarities are astounding, even having an eastern off-coast Tower like Volkihar has. Though Volkihar Castle was probably off-limits for ZOS. Or wasn’t making sense for the story.
You will be visiting this Isle as part of Update 28’s Prologue Quest, currently available on the PTS and coming to Live on PC on August 24th and on Consoles on September 1st.

We have also found the maps of the two new Houses. You can find out a little more about them in our 6.1 datamine post: [Datamine] 6.1.0 PTS | Update 27 – Stonethorn DLC.
The Alpine Gallery shares it’s Asset with the Jarl Halls found in Morthal and Karthwatch. While Stillwater recieved some new Dwarven assets.

We have also extracted the two new Dungeons Maps.

Today’s post was a little short, you we wanted to throw in a little extra:
A direct comparison of Release Tamriel and it’s new PTS version. It really shows how far the game has come in the last 6 years.

That’s all for today!
But stay tuned for our Q4 Darkstorm DLC Location Post early next week, where we’ll be sharing some Q4 Zone information and images.